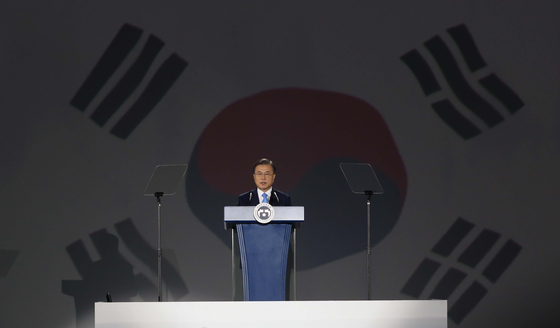 from Japanese rule in 1945 at the Dongdaemun Design Plaza (DDP) in central Seoul on Saturday. [YONHAP]

Equality and bridging social divides were the main themes of President Moon Jae-in’s Liberation Day address on Saturday, delivered amid an increasingly polarized political atmosphere surrounding his administration’s economic policies.     At the Dongdaemun Design Plaza in central Seoul, Moon trumpeted his Korean New Deal — an ambitious jobs creation plan banking on heavy investments in information technology — as a means to forge what he called a “new social contract for mutual benefit.”   “What matters the most is reducing gaps and inequality,” Moon said. “Only when everyone is living well can we say that genuine liberation has been achieved.”     In past years, Moon focused on issues like inter-Korean relations or the ongoing diplomatic spat with Japan in his Liberation Day address, which serves as one of the most important annual occasions for Korean presidents to highlight their policy platforms.     This year, the economy featured prominently in Moon’s speech, testifying to the alarm that has set in the administration due to growing public discontent over its controversial real estate policies. Read more :  https://koreajoongangdaily.joins.com/2020/08/16/national/politics/Moon-Jaein-Liberation-Day-Japan/20200816164500390.html?detailWord=
사진자료
Keyword Tag moon focuses on bridging social divides in libera