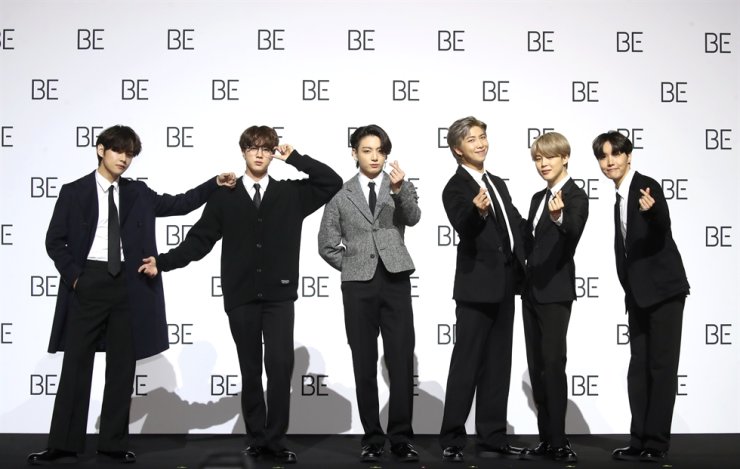 BTS members pose during a media conference for their latest album "BE (Deluxe Edition)" at Dongdaemun Design Plaza in Seoul, Friday. / Yonhap

President Moon Jae-in stressed that there are no other options but his so-called Korean New Deal.

“Since announcing the first concept [in April], the Korean New Deal has evolved,” Moon said during a Korean New Deal ceremony held at the Dongdaemun Design Plaza (DDP) in central Seoul on Monday.

“Following the Digital New Deal, which would create a major transition towards a digital society, the Green New Deal, converting into a low-carbon economy, has begun.”

Moon stressed that in the last six months the government has aggressively worked in coming up with detailed plans for the Korean New Deal including a 160-trillion-won ($144.5 billion) investment plan as well as naming 10 leading projects.

“Now we are at a stage beyond concept and entering the stage of realization,” Moon said. “Our [Democratic] party is in the center of the Korean New Deal’s evolution and development.

“The leaders [of the party] including party leader Lee Nak-yon should lead [in the Korean New Deal].”

Previous
[Korea Joongang Daily] Moon says his New Deal is the only way ...
Next